Cleaning Up! Why Gold Extraction Doesn’t Have to Cost The Earth.

A new $180-million Global Environment Facility programme will improve conditions for artisanal miners across eight countries:Burkina Faso, Colombia, Guyana, Indonesia, Kenya, Mongolia, the Philippines and Peru, while slashing  mercury pollution that harms people and wildlife according to a new report from UNDP’s GEF. 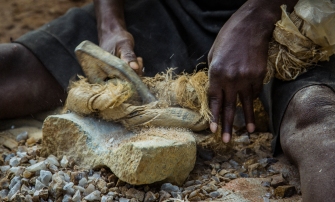 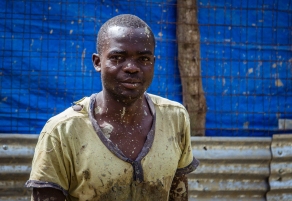 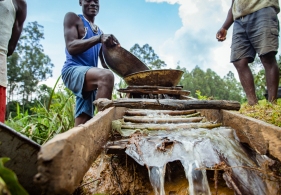 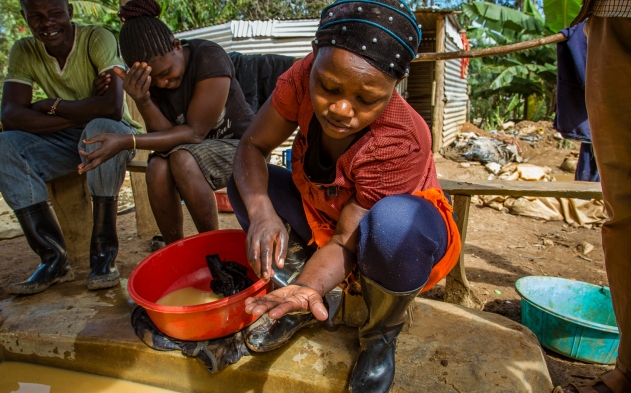 Every year, more than 2,700 tonnes of gold is mined around the world. Twenty per cent of that – over 500 tonnes annually – is produced by artisanal and small-scale miners. These miners and processors, the majority of them in developing countries, work in often harsh conditions, without the protection of industry regulations on pay, health or safety, to sate the global hunger for gold for jewellery, investment and consumer products. 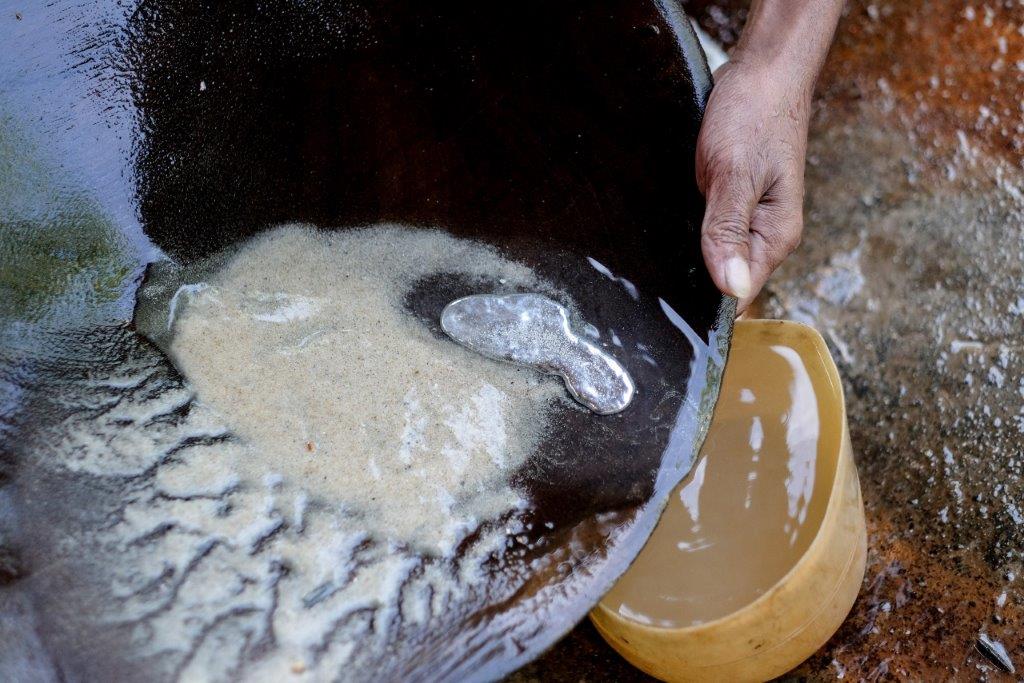 Toxic mercury is used to dissolve and concentrate the gold. Then the mercury is boiled off with very toxic fumes to reveal the gold. UNEP Image and ciopyright

The same dire effects of mercury poisoning made infamous from the Chisso fertilizer factory emissions that caused the dreaded Minamata Disease in Japan, also known as ‘Dancing cat disease’, are set loose on the environment and population through small scale gold extraction in some developing countries on a daily basis. The extraction operations may be small scale, but collectively they have big impact:

Toxic mercury is used to dissolve and concentrate the gold. Then the mercury is boiled off with very toxic fumes to reveal the gold. UNEP Image and ciopyright

In the above top three images artisanal miners in the Philippines descend flooded shafts in pitch darkness to grope for the gold-bearing debris. In the lower two images mercury is being used to dissolve and concentrate the gold.

The cats ‘danced’ because mercury ruined their brains. Mercury is carcinogenic in low doses and more swiftly lethal at stronger concentrations where it attacks the nervous system causing madness, convulsions and death. In Minamata people noticed the damage to cats’ nervous systems after they consumed contaminated fish. Soon the people were suffering too.

Urgent action is needed to protect millions of men, women and children exposed to toxic levels of mercury through gold production every year, according to the backers of a new $180-million programme to reform the artisanal and small-scale mining (ASGM) sector. 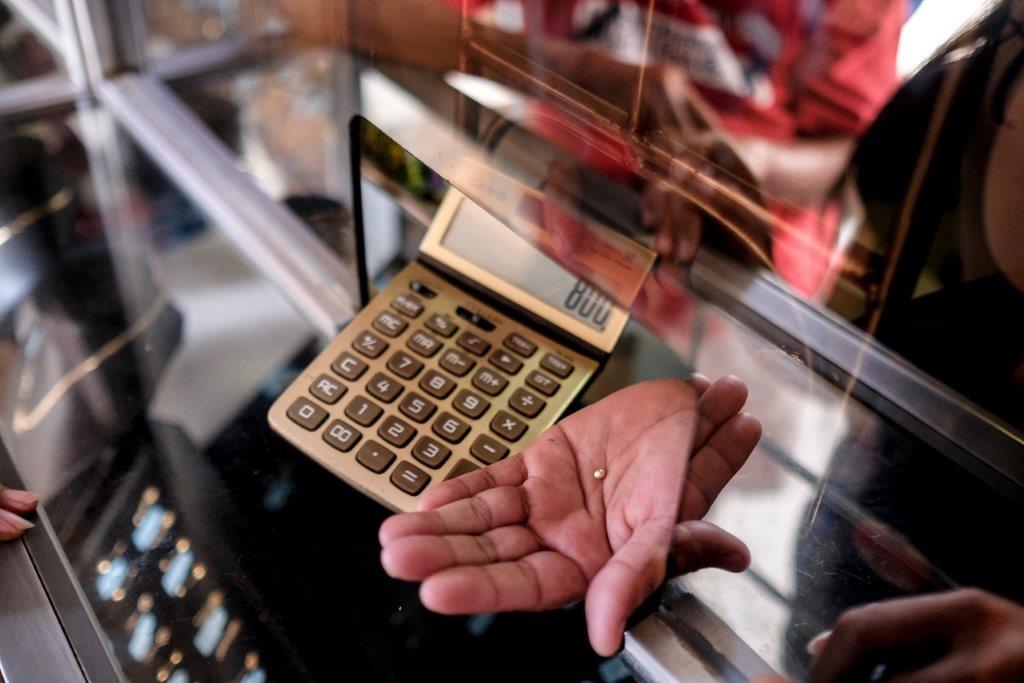 A gold dealer in Paracale shows off locally mined gold in Camarines Norte, the Republic of the Philippines: GEF image and copyright.

“From smartphones to wedding rings, gold passes through all of our hands every day. But for most of us the source of that gold, and its real cost, remains a mystery,” Gustavo Fonseca, GEF Director of Programs, said.

“Introducing safe, mercury-free technologies into the ASGM sector will help provide a safe transition to job formality and dignified work for millions, while putting an end to the environmental impacts that can pave the way to sustainably produced gold.”

With many miners relying on toxic, mercury-based extraction methods, the ASGM sector is also the world’s single largest source of man-made mercury emissions, releasing as much as 1,000 tonnes  of mercury (almost 40 per cent of the global total) into the atmosphere every year.

Launched at London’s Goldsmiths’ Centre, on February 18th 2019, the Global Environment Facility-backed Global Opportunities for the Long-term Development of the ASGM Sector (GEF GOLD) programme aims to reduce the use of mercury in artisanal gold mining and introduce and facilitate access to mercury-free extraction methods, while also working with governments to formalize the sector, improve miners rights, safety and their access to markets.

“By phasing out mercury use and connecting miners to markets for responsibly produced and sourced minerals, GEF GOLD will help to ensure the gold value chain both supports miners and provides consumers with access to ethically produced, environmentally sustainable gold,” Jacob Duer, Head of the UN Environment Chemicals and Health branch said.

“Promoting and facilitating access to non-mercury processing techniques for artisanal and small-scale miners is vital – not only to reduce mercury emissions, but to protect the health of vulnerable communities.”

Studies indicate that mercury exposure in artisanal and small-scale miners is a major, largely neglected global health problem – putting miners and their communities at risk of impacts from permanent brain damage to seizures, vision and hearing loss, and delayed childhood development.

“Mercury emissions impact health and ecosystems, contaminating the food we eat, the water we drink and the air we breathe. This is a long-term problem we need to confront now. Joint initiatives like GEF GOLD demonstrate that when we unite for environmental action we can protect community health, provide livelihoods to those most in need, and save the planet.”

As many as 15 million people work in the ASGM sector globally – including 4.5 million women and over 600,000 children. While ASGM represents a development opportunity for rural populations, who often have few livelihood alternatives, miners operate on the edges of legality in many countries, with ASGM either banned outright or limited by legislation and licensing procedures designed primarily for large-scale operations.

By supporting the regulatory and policy reforms needed to formalize the work of artisanal and small-scale miners across the eight programme countries, GEF GOLD aims to secure miners’ livelihoods, through opening up the access to markets and finance needed to increase incomes and enable the uptake of mercury-free technology. By phasing out mercury use, the programme aims to achieve eventual mercury emission reductions of 369 tonnes, supporting countries’ commitments under the Minamata Convention on Mercury to reduce and, where feasible, eliminate mercury use in the sector.

Dr. M. Sanjayan, CEO of Conservation International says “Mercury is not necessary to mine and process gold. In the developed world, mercury has not been widely used in gold production for a century. By improving small-scale gold mining in the developing world, we can improve the health of people and preserve Nature that provides us so much. That means mining in the right places and in the right ways. It means professionalizing practices to not only protect human health and the environment, but to create better returns for mining communities. With the support of the Global Environment Facility, and in close consultation with the government, we are doing exactly this in Guyana.”

Alongside working directly with artisanal and small-scale miners and national authorities, the GEF GOLD programme will work with the private sector across industries and partners including the Better Gold Initiative, Alliance for Responsible Mining and Fairtrade International to promote compliance with international standards on responsible mineral supply chains.

About the Global Environment Facility

The Global Environment Facility was established on the eve of the 1992 Rio Earth Summit to help tackle our planet’s most pressing environmental problems. Since then, the GEF has provided over $17.9 billion in grants and mobilized an additional $93.2 billion in co-financing for more than 4500 projects in 170 countries. Today, the GEF is an international partnership of 183 countries, international institutions, civil society organizations and the private sector that addresses global environmental issues.

UN Environment is the leading global voice on the global environment. It provides leadership and encourages partnership in caring for the environment by inspiring, informing, and enabling nations and peoples to improve their quality of life without compromising that of future generations. UN Environment works with governments, the private sector, the civil society and with other UN entities and international organizations across the world.

Got something to say? Go for it!