An Interview with a Pine Snake

The Louisiana Pine Snake is Officially Listed by US Wildlife and Fisheries as Threatened as of May 7th, 2018

Monroe, Louisiana. It was my birthday. To celebrate we’re standing in front of  Black Bayou Lake National Wildlife Reserve’s modern and well-appointed Visitors’ center about five yards away from a majestic bronze statue of an Alligator Snapping Turtle, it’s big enough for a toddler to ride, it’s life-sized.  A warm gentle breeze is lightly blowing Wildlife and Fisheries Ranger Nova Clarke’s hair. Around both her arms entwines a lithe, beautiful snake about five feet long. “This is ‘Brother’, Nova explains, “Our other Pine Snake, ‘Grouchy’ declined to be interviewed today as he’s shedding.”

Our laughter subsides. “So, you’re North America’s rarest snake then?” I opened the interview, feeling rather awed by my proximity to this living national treasure. 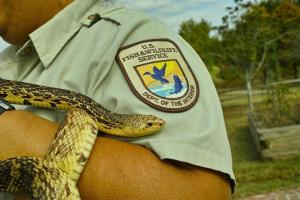 “Well, obviously.” Brother responded languidly. He would have rolled his beautiful dark brown eyes, if he could, but instead he flicked out his quick tongue to taste the air around his interviewer.

Fancy being sensed by such a celebrity! “Congratulations upon your newly designated status as an threatened species effective as of May 7th 2017,” I blurted self-consciously, wondering what I tasted like.

I broke it with a piercing question, “How do we know that you really are Pituophis ruthveni, the rare and endangered IUCN Red-listed Louisiana Pine snake and not some sort of cheap foreign copy?” 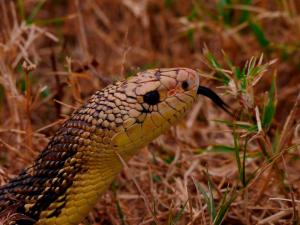 “Brother”, senses his environment with his tongue and Jacobsons’ organ.

“Phew! That’s a relief.” Brother answered, “For a moment I thought you were going to ask, ‘how do we know that you’re a male?’ That would have been a tough one! There’s very little to distinguish between us visually you see, and I can see from your somewhat less useful tongue that you wouldn’t detect the pheremonal difference. My tongue is forked so that I can smell in stereo. What I do is flick my tongue out gather the significant molecules and whip them back in to my mouth to my Jacobson’s organ. Then I know what I’m dealing with. Well, to answer your question, in lieu of a driver’s licence or other form of ID, I’d have thought that my clean lines, slightly up-turned nose and smooth, cool dry skin of creamy ivory marked with bronze-brown patches would serve to prove that I am Pituophis ruthveni and none other. The more common Pituophis has more black on him you see.”

“Ah. There’s nothing common about you, I can see. You seem very good-natured and harmless. One of Louisiana’s model residents, I’d say. Wouldn’t hurt a fly I expect?” I thought he looked gentle as my camera clicked away. His pupils are round, not vertical slits like the venomous vipers, and nobody could confuse him with the stripey (‘red and yellow can kill a fellow’), venomous Coral snake. I stroked his skin gently with two fingers, it’s wonderfully silky.

“Yes. We’re nonvenomous, good neighbors really, unless you happen to be a Baird’s Pocket Gopher, or the occasional small bird. We tend to strike the birds and wrap them in our coils and sqeeeeze them tight before we eat them whole. We live in the gophers’ burrows. We squeeze them against the burrow wall before swallowing them whole.”

“Well, why not? A snake has to eat after all and have somewhere to lay its head.” I shrugged. “What do you eat here?”

No wonder he keeps his figure, I thought, “Not microwaved?” I joked.

“Cook out the vitamins? Please! That would be gross.”

“So it would, yes.” I conceded, “Now could you tell us a bit about your native habitat?”

“Give me the rolling hills with sandy soils and Long leaf Pine trees every time. These days we’re only found in a few places in western Louisiana and eastern Texas. We live in Kisatchie National Forest so you don’t have to trespass on private property to visit us. ”

Kisatchie National Forest’s rich botanical diversity being explored by Louisiana Master Naturalists Northeast Plant Workshop with Dr. Charles Allen who runs a variety of Botanical courses, 2018. There were over 486 entries on our checklist and we added some!

At this point Nova let him down onto the short grass for some free exercise.

“That’s handy, yes, but why are you endangered anyway? You look like you can take care of yourself.”

Brother showed us how well he could conceal himself in the very short grass. When coiled, his five-and-a half foot length disappeared in a two-foot square area of grass and daisies.

“We have to watch out for hawks and eagles, we are diurnal and spend much of our lives hidden or underground. Changing forestry practices have reduced our habitat, we can only live where the gophers are. Frequent forest fires opened up the woodland and made space for the herbaceous plants that the gophers like to eat. More fires mean more gophers and in turn, more of us. Ironically, modern fire safety hurts us as it reduces our food supply. ”

He then approached the kerb of the pavement. “We are found in a few other forest types that border the pines, like Blackjack Oak, but it’s mostly Longleaf Pine that suits us. We like basking on warm roads, so watch out for us, please, in our home area. Please avoid running us over or stepping on us, because our bones are delicate and we can easily suffer internal injuries.”

“We’ll bear that in mind. I’ve heard that you can sometimes hiss quite loudly when riled up. It’s not nice to scare people, you know.”

“Hiding’s my first line of defense, running away is my second – I don’t start hissing until I’m scared for my life! If people stay still when they see a snake and give us some space and due respect, then there’ll be no unpleasantness. We don’t want to bite you. We can’t eat you.”

Following the kerb, he was now fully stretched out and I was flat on the ground in front of him.  Just then a family of visitors approaching the center paused to admire him and I saw ‘Brother’ serving in his ambassadorial role, not just for his species, but for the whole snake family. Nova quickly scooped him up to control the encounter, introduced him and said that he could be gently touched. 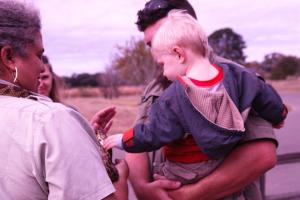 The flaxen-haired toddler Bryson fearlessly reached out to stroke him. I saw the magic happen. The adults were warier, but allowed the contact. Bryson was gentle, Brother was unphased, he has met thousands of people including many school trips.

“Well, maybe, but Bryson’s family is the bright hope, because of his parents’ trust today he’ll grow up free of prejudice and maybe he won’t throw rocks at snakes or shoot them gratuitously. I don’t think his folks will either for that matter.”

Hopefully the new designation will help protect his species long into the future.

If you would like to see Louisiana Pine Snakes for yourself please visit Black Bayou Lake National Wildlife Refuge off Highway 165 in Monroe, Louisiana.

You can find most of Kisatchi Forest in central and central western Louisiana and a section in north eastern Louisiana that includes Corney Lake. It has a variety of great camping opportunities including basic campsites for primitive camping in lovely woodland scenery.

Check out The Friends of Black Bayou group on Facebook to see some lovely wildlife pictures taken at this super nature conservation area and be advised of forthcoming events!

Charles Paxton was not paid for any of these endorsements.