Save Our Ocean, says Cody Simpson, UN Advocate for the Ocean on World Oceans Day 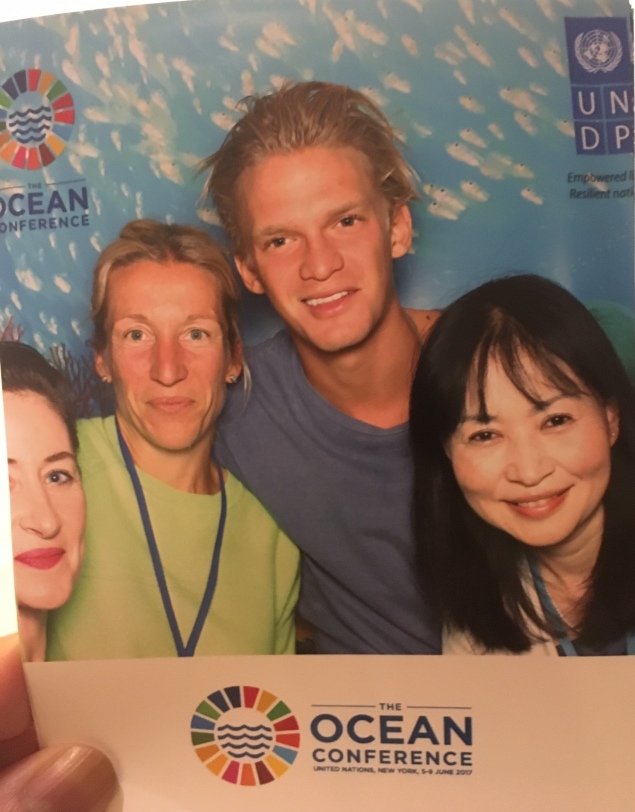 Cody Simpson with UNDP staff in New York. Cody is using his personal connection to the marine environment to advocate for the well-being of the oceans and the people and wildlife that depend upon them.

Wildopeneye is very excited about the World’s first Ocean Conference now being held in New York. When I visited I was surprised at how clean the sea looked and smelled around Brooklyn Bridge in New York despite being next to one of the world’s biggest and busiest urban centres.

According to the UNDP Press release, 7th June 2017,  the United Nations Development Programme have decided to appoint globally-acclaimed Australian singer-songwriter Cody Simpson as its first-ever Ocean Advocate to help raise awareness of the crucial role the ocean plays in the health of our planet and people!

The singer is urging the global community and his millions of devoted fans to join the #SaveOurOcean campaign.

“I grew up by the ocean and the beach,” said Simpson during the event held at the UN headquarters in New York. “I want to do everything I can in my own life to protect and preserve the ocean. Just as you should in yours.”

The health of the world’s oceans is under threat, with 40 percent heavily affected by human activity, including pollution, over-fishing and loss of coastal habitats. The resulting negative effects on the climate, the global economy and food supply are becoming more and more visible every day.

Sustainable Development Goal No. 14 is for the Oceans. Andy Luck image and copyright.

The ocean is critical to life on this planet and protecting it is Goal 14 out of the 17 Sustainable Development Goals, a set of Global Goals agreed by world leaders to end poverty, inequality and combat climate change by the year 2030. The need to act is so urgent, some of the targets under Goal 14 need to be achieved by 2020, a decade earlier than many other Sustainable Development Goals.

Sustainable Development Goal no.14 is “Conserve and sustainably use the oceans, seas and marine resources for sustainable development”

“The oceans are in serious trouble right now and we need passionate advocates like Cody to help us restore them to health,”  Mila Rosenthal, UNDP Communications Director said. “We are thrilled to team up with Cody, whose dedication we hope, will inspire millions of others—especially young people—to play an active role in saving the oceans and protecting our shared future.”

Simpson will kick off his new role at the historic Ocean Conference, during which he will attend an ocean-themed photo exhibition, Waves of Action; explore an ocean lab; speak at the premiere of Urban Bay, a documentary exploring the underwater world of Rio de Janeiro’s Guanabara Bay; and join the closing celebration on World Oceans Day with a live performance in the General Assembly.

UNDP has joined the historic Ocean Conference in New York this week (5-9 June) to highlight the direct link between a healthy ocean and ending poverty. The ocean supports the livelihoods of an estimated one in every ten people on the planet, including some of the world’s poorest and most vulnerable.

The first-of-its-kind Ocean Conference has brought together political leaders, governments, NGOs, the private sector, United Nations agencies and others to agree on urgent action to restore the health of our ocean and achieve the Global Goals.