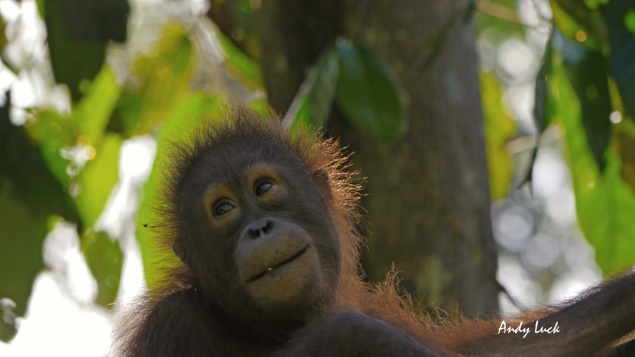 Endangered species such as the Orang Utan are suffering consequences of human greed. Could this be the worst environmental crime of the 21st Century? Erik Meijaard says so in his article for The Jakarta Globe. This year’s burning of forest in Borneo and Sumatra hazardous to wildlife and an estimated 40,000,000 humans. Andy Luck photo and copyright.

Hellish visions of burning tropical forest and the underlying peat that helps retain essential moisture to support crucial wildlife habitat are back in the news and man-made fires are to blame yet again. This year’s fires in Borneo and Sumatra are exacerbated by El Nino drought conditions and Erik Meijaard says not enough is being done to address what he calls the biggest environmental crime in the C21st, please see  Erik Meijaard: Indonesia’s Fire Crisis — The Biggest Environmental Crime of the 21st Century.

The immediate solutions are obvious: a complete and enforced fire ban, especially on peat; a major scale-up of firefighting efforts, using all available means, national and international; and a prohibition on further peat development and funding for peat restoration. There is an immediate need to start divesting from all agricultural production on peat, or only allowing production that can ensure near-surface water tables. For the areas of drained, degraded peatland not under agriculture there need to be massive programs to block and fill all canals, followed by reforestation to get something like a humid microclimate at the peat surface.

These fires are disastrous locally and globally.

Globally, they represent danger from: