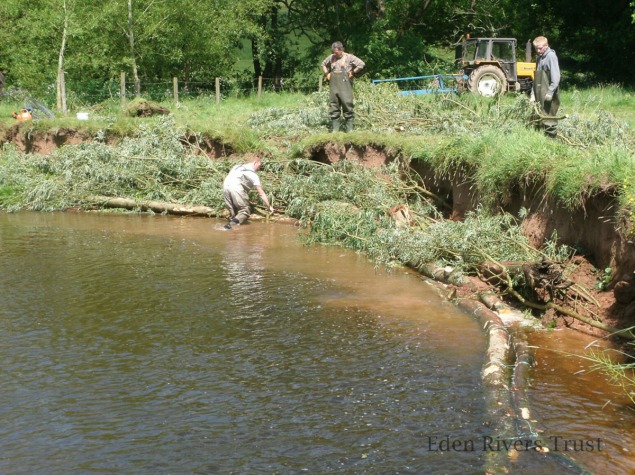 Great improvement is being seen on the River Petteril in north Cumbria thanks to local farmers working with Eden Rivers Trust to clean up the river and bring back wildlife.
This summer the Trust has worked with 14 farms to carry out work which will benefit the river.

Why does the Petteril need restoration?
The Petteril needs help because it has deteriorated from being the best trout river in the Eden Valley in the 1940’s and 50’s to now being one of the poorest. This is due to a series of pollution incidents, more intensely farmed surroundings and the affects of the adjacent M6, A6 and railway line. All have led to a decline in the
quality of the water and habitat and hence its wildlife.

The work within this Petteril Project will help to clean up the river and bring back the plants and animals which
once thrived there. The River Petteril is a tributary of the Eden and runs for 25 miles from Penrith to
Carlisle. Eden Rivers Trust has been working on a restoration project for the last four years with local farmers, the Environment Agency (EA) and Natural England’s Catchment Sensitive Farming Scheme.

On many of the farms the Trust has helped to improve their yards and buildings in a way that reduces pollution reaching the river. For example new roofs have been built over manure stores and farm yards where cows collect to reduce the amount of dirty water reaching the river. Cement yards, drainage channels and guttering have all been installed to divert clean rain water away from dirty yard areas and to collect contaminated water so that it does not end up in the river.

Alison Reed, River Petteril Project Officer at Eden Rivers Trust, said, “The farmers in the area have been fantastic and are really interested in implementing the changes which are needed to improve the river. Often we find the discussions lead to a long term plan for the farm which benefits the environment, animal welfare and the farm business.”
Richard Wood, Project Manager, Environment Agency, said, “Our rivers support vital habitats and are improving but there is still more we can do. Using catchment data we have been able to target areas on the Petteril where this kind of work is of most value. It is great to see this all coming together with so many improvements being delivered on the ground.”

The current funding for the project is due to come to an end in March 2015 but there is still much work to be done. Eden Rivers Trust has a list of farms to work with along the Petteril during 2014.

Higher rainfall and flood events are becoming more frequent, creating problems with more water on the land and in the farm yard. This often needs a more focused investigation such as surface water plans produced by the Catchment Sensitive Farming Scheme which identify measures to tackle some of these problems.
Many of the tributaries of the Petteril such as Blackrack Beck are also prone to the build up of sediment in the river which makes it difficult for fish to live and breed there. The Trust is surveying the beck and investigating where the sediment is coming from. By working with the land owners it is hoped to solve the problems and
reduce the amount of sediment in the river. Some landowners are already tackling the issue and looking at ways of improving the beck, for example by moving fences further away from the river, re-meandering the beck and planting trees. 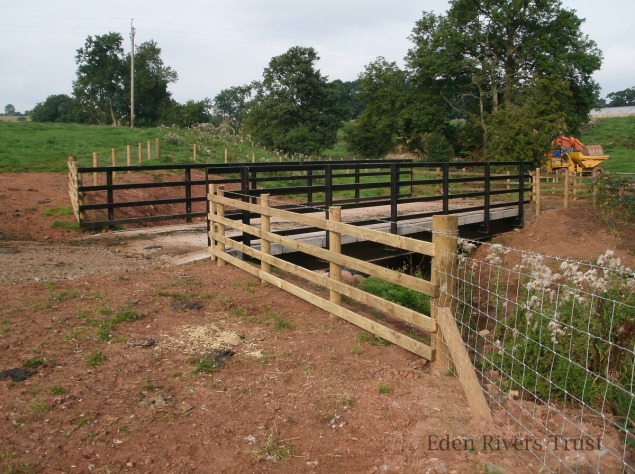 Lamb Beck
Eden Rivers Trust is a Company limited by guarantee number 06460807, registered in England and Wales.
and also a Registered Charity, Number 1123588.

As part of their Cherish Eden (Heritage Lottery project) Eden Rivers Trust has an apprentice scheme and are looking for 6 apprentices to start in March 2014.  Click here to view a copy of their advert please pass this on to anyone you know who may be interested in the scheme.